While there is no such thing as a truly hypoallergenic cat, there are many breeds that are less likely to trigger a reaction. Though we heavily recommend against adopting a pet and “hoping for the best,” we think these guidelines may help you schedule a few kitty play dates to find the breed that’s right for you. 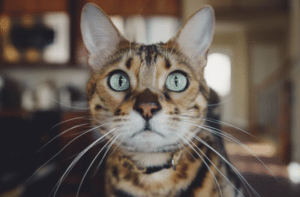 Selectively bred to mimic the look of jungle cats, the Bengal is a surprisingly gentle creature. Known for their large spots and rosette patterns on their coat, the Bengal most closely resembles an ocelot or leopard – though we wouldn’t suggest inviting one of those jungle cats to live in your home. Fortunately, the Bengal is a friendly alternative that also produces less dander than some other breeds.

Known for their strikingly blue eyes, Balinese cats are a natural mutation of the Siamese breed, another allergy friendly kitty. Widely considered the most intelligent long-haired cat, the Balinese produces low amounts of the Fel d1 protein, which is a common trigger for cat allergy sufferers.

Originally bred in Southeast Asia, the Burmese cat is now a popular breed in the United States. The breed has evolved since its American introduction, and how has a slightly different head and body shape than the original, but all Burmese cats are known for being playful and vocal (and surprisingly low dander!).

Native to Thailand, the Siamese cat is known for its blue, almond shaped eyes and triangular head topped with large ears. Siamese cats also typically have thin, sleek bodies and are affectionate and social.

Hailing from Russia, Siberian cats sure do know how to make a statement. Their long, thick fur coats may not seem like a super allergy friendly option, but they are known to produce less Fel d1 than other breeds, making the risks of allergic reaction lower than one would imagine.

Don’t get discouraged if you have trouble finding a cat that doesn’t trigger your allergens. Every animal is different and we believe there’s a furry friend out there for everyone!

Be sure to check back here for more cat facts and quick tips, and keep the Cat Clinic at Cherry Hill in mind if you find a furry friend who needs medical services or a check-up. Give us a call at (856) 662 2662 and one of our passionate doctors would be happy to help you.